The memory of War 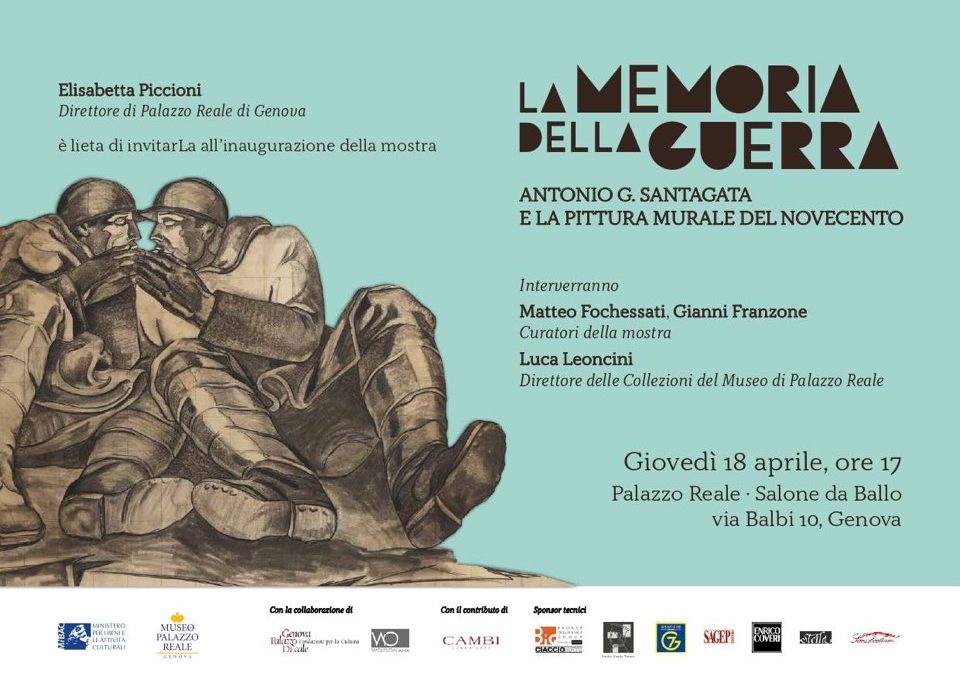 The memory of War

Antonio G. Santagata
and mural painting of the twentieth century

Palazzo Reale, in the Teatro del Falcone, opens to the public from April 19 to September 8, 2019, a large exhibition, curated by Matteo Fochessati and Gianni Franzone, organized in collaboration with the Wolfsoniana-Palazzo Ducale Foundation for Culture and dedicated to the opera Of the Genoese artist Antonio Giuseppe Santagata (Genoa, 10 November 1888 – 13 September 1985), inspired by his direct participation in the war conflict.
With respect to the theme of war, the aspect that the curators have chosen to celebrate – and around which the exhibition event is built – is that of memory because the memory of that terrible conflict, even today, mixes feelings of dismay and marked accents Rhetorical, well persistent in a certain imaginary war and patriotic.
The reenactation and the echo of the conflict in the years between the two wars were, moreover, marked by ideological characters that arose from the propaganda action of the Fascist regime and which contributed, in a decisive way, to the formation of an aesthetic Of politics that found its most natural linguistic expression in the figurative culture of the Italian twentieth century.
The resumption, in this field of research, of ancient pictorial techniques and the close dialogue established between artists and architects represented one of the most significant moments of this tendency which, beyond its ideological compromises, was central in National artistic panorama of that period.
It is not by chance that the exhibition will be built around the sizeable nucleus of Santagata cartoons from a precious private house and referring to its main works of mural painting, from the frescoes for the Hall of the gathering of the mother house of Maimed of Rome (1928) at
Those for the courtyard of Victories (1936) in the same building designed by Marcello Piacentini, the stained glass and the fresco for the House of mutilated
of Genoa (1938-1939) to the great fresco heroic life of Antonio locatellifor the Littoria House of Bergamo (1940). Together with these great cartoons, we will exhibit works coming from the Wolfsonian – Palazzo Ducale Foundation for Culture, from the Museum of the Risorgimento of Genoa and from
Several private collections. The choice to look at the representation of the war proposed by Santagata can offer a precise and documented narration of the main historical and military events of the Italian Army, but also a sincere testimony, less rhetoric and more human, On the daily life of the infantry to the front. Thanks to his friendship with Carlo Delcroix, president from 1924 of the National Association mutilated and disabled of war, Santagata, author of the pictorial cycles for the mother house of the mutilated of War of Rome, was also involved in the decoration of the main Houses of the mutilated, built in those years throughout the peninsula, and thus became one of the main protagonists of the great mural season, which marked the Italian artistic research between the two wars.
Focused on the main events of Italian participation in the Great War and the heroic sacrifices borne by the milites along the bloody path to victory, the great decorative and mural cycles of Santagata, despite some representations More allegorical-as in the case of the depiction of the stained glass on the main façade of the House of the mutilated of Genoa-testify to the profound participation of the artist in the Bmateria treated and document, almost in direct, the daily life and the Most common episodes of trench warfare.
For these reasons the exhibition the memory of the war, focused on the artistic production of Santagata, but supplemented by some cartoons and sketches of other Italian artists active in the same field, can offer food for thought and interest for a large audience . In particular, the exhibition will be accompanied by events and in-depth meetings on the topics addressed within the exhibition and by educational programs for schools, dedicated not only to the history of the Great War, but also to an investigation into Ancient techniques taken by Italian artists on the occasion of the decorative cycles of the twentieth century.
In order to enhance the original approach of the exhibition and to reinforce its didactic value, it is foreseen that a section is dedicated to the mutilated houses, as architectonic typology present only in the Italian context, unlike the many monuments , ossuaries and shrines scattered throughout the rest of Europe. Obviously the buildings in which Santagata worked: In addition to the already mentioned mother house of Rome and the House of the Mutilato of Genoa, also those of Palermo, Ravenna, Milan, but also of Padua, Florence and Bologna.
Not least purpose of the section will also be to invite the public to reflect on the preservation and reuse of these architectural artifacts, when, for obvious reasons, the number of members of the National Association mutilated and disabled of war It is shrinking more and more and the reasons why these buildings were built are lacking.

Until Saturday, September 7, 2019 will be possible to visit, exhibiting the entrance ticket of the exhibition “The Memory of the war. Antonio G.
Santagata and the mural painting of the Twentieth Century “, the Museum of the Risorgimento at reduced price (€3).
The promotion has reciprocal value. Catalogue: SAGEP Editore

Garanzie per i clienti